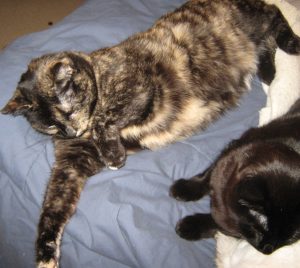 Helen, our 18-year-old tortoiseshell, died last week.  It has been hard on me, harder than any other pet’s death.  Helen and I were like bonded cats at the pound.  We did everything together: played string, read books (sometimes aloud), watched birds, had elevenses, watched six seasons of The Americans, prepared dinner (hers came in a can), napped, and listened to music.  She was fond of “You’re so Vain” (Carly Simon), “Year of the Cat” (Al Stewart), and “Mellow Yellow (Donovan).  Cats like simple songs.

As she got older, she spent most of her waking hours sitting with me (or on top of me) as I reclined and read.  She carefully marked the books by rubbing against the corners.   She was fond of books, because I’d read poetry to her as a kitten.  She enjoyed Edward Lear’s “The Jumblies:  “Far and few, far and few,/Are the lands where the Jumblies live…”

She didn’t meow, she chirped.  It was so sweet.  She was also a survivalist:  she liked to hop in the tub and lick the faucet. And she had a strong will.  She dominated the household.  She was a  fascinating person!  She ignored other cats, but they followed her around the house.

I had so much fun with her.  But In the last few years she had health problems and surgeries. She lost too much weight, shed clumps of fur, her kidneys were failing.  All the problems of aging cats.

In Helen’s honor, I have translated and adapted the Roman poet Martial’s poem on the death of a pet dog, Issa.  In the first line, Martial refers to  Catullus’s famous poem about the dead pet sparrow of his girlfriend, Lesbia.

I have substituted the name Helen for Issa.

My adapted translation of Martial, Epigrams, I.109

Helen is more mischievous than Catullus’s sparrow,
Helen is purer than the kiss of a dove,
Helen is lovelier than all the maidens,
Helen is more precious than Indian stones,
Helen the cat is my darling.
If she meows, you will think she speaks;
She feels both sadness and joy.
Resting in my lap she stretches and snatches sleep
so that no breath is sensed.
In order that the last light may not wholly steal her,
I am painting a picture
In which you will see a cat so like Helen
That she herself is not more like herself.
Compare Helen with her picture
And you will think each one is real,
Or you will think each one is painted. 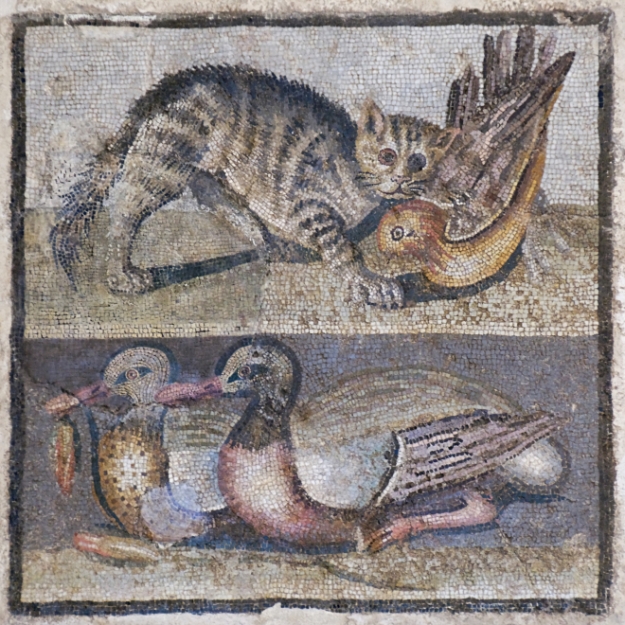 Floor mosaic in ancient Rome, with cat and two ducks.